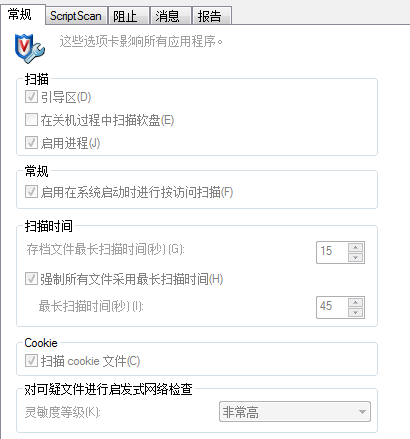 Known issues in this release of the software are described below:

Issue: In some situations, the product switches over to using the normal copy of the DAT files, instead of the runtime DATs:
If the McAfee AntiSpyware Enterprise module is installed after VirusScan Enterprise 8.7i Patch 1 is on the system, some of the new registry settings, which are new for the runtime functionality, were changed back. This resolves itself with a restart of the McTaskManager service or with a reboot.
If one of the scanners is busy on a large file when the AutoUpdate process posts the revised copy of the DATs, the process of refreshing the runtime copy of the DATs times out. All scanners use the normal DATs until the next successful update.
The VirusScan Modules* will not use the runtime DAT functionality until they received their next Patch.

Issue: With the improved functionality of the on-access scanner memory scan, lower and middle ranged systems may see a performance impact at startup and after a successful AutoUpdate of the engine or DATs. Currently the Process on enable option is enabled by default on the shipping version of VirusScan Enterprise 8.7i. McAfee recommends that in a managed environment, disable this option prior to deployment of the Patch, until the impact of memory scanning can be determined for your environment. It is not possible to maintain both the more comprehensive scanning that comes with Patch 1 and later, and the former level of scanning. Therefore, only the more comprehensive scan is used.
NOTE FOR CURRENT AND NEW USERS:
The Patch installation does not modify current settings to disable the Process on enable option.
The VirusScan 8.7i NAP and extension that are included with the Patch do change the McAfee Default policy, but do not modify the My Default policy, or any custom policy settings that were made prior to the checkin of the new NAP/extension.
The VirusScan Enterprise 8.7i Repost with Patch now installs with the Process on enable option disabled, unless the Maximum Security option is selected during the installation.

Issue: VirusScan 8.7i Patch 1 introduced an issue with Microsoft Outlook where keyboard entries made during the delivery of an email were lost.
NOTE: This issue is resolved by HotFix VSE85HF464768, included with this release. Refer to "Additional Steps for HotFix 464768" for installation instructions.

Issue: The Access Protection rule "Prevent termination of McAfee processes" was improperly disabled, on 32-bit systems, even when the managed policy specified otherwise.
NOTE: This issue has been resolved in the fully released version of the Patch. HotFix VSE85HF464768, included with this release, resolves the issue for customers who installed Patch 1 during the managed release cycle. Refer to "Additional Steps for HotFix 464768" for installation instructions.

Issue: The Patch installer included an MSI deferred action to resolve an issue found when attempting to uninstall the Patch on some newer operating systems. The deferred.mfe file updated the cached MSI of the currently installed VirusScan 8.7i product. If the Patch is included in a McAfee Installation Designer customized package, the deferred.mfe file was not included, and therefore the Patch might not be able to be uninstalled in some newer operating systems.

Issue: If you installed this release interactively and cancelled the installation on a system where a previous Patch was installed, after the rollback was complete, the previous Patch might no longer reported to ePolicy Orchestrator or appeared in the About VirusScan Enterprise window.

Issue: Installing the Patch and specifying a log file path using the Microsoft Installer (MSI) switch “/L” did not log to the specified path. A log file capturing full data was logged to the folder “McAfeeLogs” under the Temp folder.

Issue: Uninstalling VirusScan Enterprise Patches is possible for computers running Windows Installer v3.x or later. This technology is not fully integrated for Windows 2000 operating systems, so there is no option to remove the Patch in Add/Remove programs. See instructions under Removing the Patch for removal via command-line options.

Issue: Patches for VirusScan Enterprise 8.7i can only be uninstalled via Add/Remove programs, not via ePolicy Orchestrator.

Issue: Silent installs may fail on hard drives that are designated as dynamic. The on-access scanner service fails to start, and the installation will roll back. (Reference: 443669)
Resolution: The patch 1 and later install packages will now install to a dynamic disk, silently.

Issue: Sporadic crashes were seen on multi-processor systems, with the Lotus Notes scanner file ncdaemon.exe, during startup and general use of Lotus Notes. (Reference: 442337)
Resolution: The Lotus Notes scanner has been corrected to prevent a race condition where different scanner threads were starting and stopping out of sequence.

Issue: A flaw in the caching algorithm sometimes caused files in removable media to not be scanned. (Reference: 443104)
Resolution: The Anti-Virus Filter driver was updated to clear the cache of removable media upon attaching to the system.

Issue: The on-access scanner contained a flaw in the scan on close logic. This could cause a file to be queued up for scanning a second time. (Reference: 434475)
Resolution: The Anti-Virus Filter driver no longer queues these unnecessary scan requests.

Issue: On Microsoft Windows Vista SP1 or 2008 server, sharing violations could occur when working with remote files while network drive scanning was enabled. This resulted in being denied access to files, or being unable to modify or save a file. (Reference: 447282)
Resolution: The Anti-Virus Filter driver has been updated to better handle potential sharing violations that could occur and avoid conflicts.

Issue: A 8E bugcheck (blue screen) might occur during the “Memory for Rootkits” portion of an on-demand scan. (Reference: 445490)
Resolution: The code analysis driver now uses a more robust method of querying the system for driver object data.

Issue: In an ePolicy Orchestrator managed environment, the agent’s Collect and Send Properties function could cause the McAfee Product Manager service to spike its CPU utilization for extended periods of time. (Reference: 457421)
Resolution: The VirusScan Management Plug-in has been updated to call for the scan engine and DAT files via a new API call, rather than initializing the engine to retrieve the information. This lessens the CPU time involved during the agent Collect and Send Properties function.

Issue: The VirusScan Console On-Delivery Email Scanner entry was not worded correctly in German. (Reference: 438931)
Resolution: The VirusScan Resource file updates the displayed text to the correct wording in German.

Issue: One of the ScriptScan “McLogEvent” entries was always recorded in English. (Reference: 431071)
Resolution: The Announcer library was updated to remove the extra notification.

Issue: Script errors were seen when attempting to view the Japanese text, of the product description window, in ePolicy Orchestrator 3.6.x. (Reference: 434203)
Resolution: The VirusScan 8.7i NAP file has been updated to display the Japanese page in its proper Unicode format (UTF-8).

Issue: Events generated by the VirusScan Enterprise for Offline Virtual Images 1.0 software were not being generated in ePO reports. (Reference: 439832)
Resolution: The McAfee Announcer library changed properties of the events to support current reporting in ePolicy Orchestrator 3.6.1.

Issue: The Access Protection includes and exclude fields permitted a limited number of characters in the extension interface. (Reference: 457418/457419)
Resolution: The VirusScan 8.7i extension updates the maximum limit of the include and exclude fields, to be consistent with the point-product interface.

Issue: Scanner exclusions that were entered in ePolicy Orchestrator with a preceding blank space did not show up correctly when they were enforced on the client. (Reference: 457420)
Resolution: The VirusScan 8.5i extension has been updated to strip any preceding blank spaces from exclusions when they are entered in ePolicy Orchestrator.

Issue: VirusScan Enterprise added some new events that were not included in the default event filter, which was provided by ePolicy Orchestrator. (Reference: 462927)
Resolution: The VirusScan Reports extension updates the current list to allow filtering of these events.